In the inaugural season of the Girls Academy League, the Cincinnati United Premier (CUP) 07 GA was crowned National Champions after defeating Lou Fusz Athletic in the National Championship match by a score of 3-1.  Lou Fusz, who were champions of the Frontier Division, were previously unbeaten in the league competition, amassing a record of 13 wins and 2 draws during the 2020-2021 season.

For their part, the CUP 07 GA team earned their 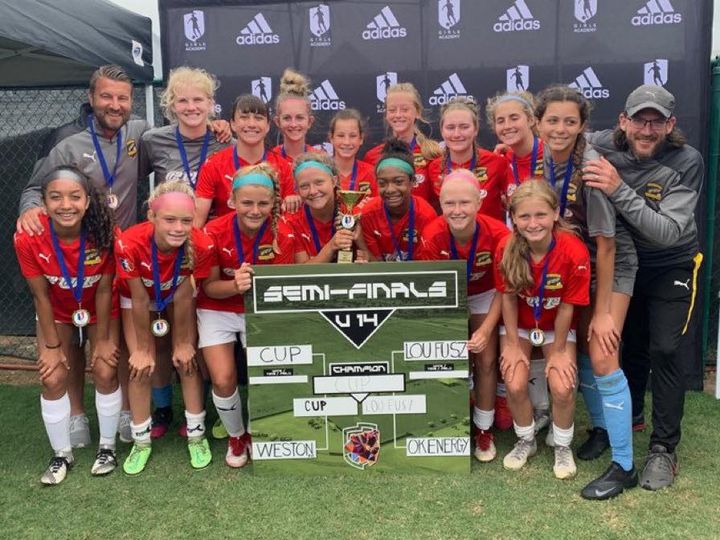 berth to the GA playoffs after finishing in 2nd place in the MId-America Conference with a record of 15 wins and 2 losses.  The 2nd seed in their playoff group, CUP went unbeaten in group play with 2-0 victories over City SC (CA) and Houston Dash (TX) as well as a 1-0 victory over top seed FC Bay Area.  Anneliesse Knight and Gianna Mylnek were unbeatable in goal during group play making fantastic save after save to secure three straight shutouts as CUP advanced to the knock-out rounds of the competition.

This set up a semi-final showdown between south Florida perennial powerhouse, Weston FC, and one of the midwest's most consistent developers of talent, Cincinnati United Premier.  The two teams met after a day of rest following group play.  CUP quickly found itself 2-0 to the positive at half time after goals from Scarlet Cogswell and Tatum Borman.  CUP would find the third goal shortly after the break when Lexi O’Shea slipped Scarlet Cogswell behind the Weston back four. Cogswell cleverly cut the ball back into the well-timed run of RJ Marques, who calmly slotted the ball home with a left-footed finish.  A last ditch effort from a restart deep in CUP’s half saw Weston make an entry on the score sheet.   It was, however, too little too late for the side from South Florida as CUP secured a 3-1 victory as well as a place in the inaugural U14 Girls Academy League National Championship match.

The other semi-final matchup saw first place Frontier Conference team Lou Fusz Athletic (LFA) match up against a familiar rival, second place Frontier Conference team Oklahoma City Energy.  After a back and forth affair, a late goal by LFA set up a rematch between CUP and LFA, who had previously met this season in a pre-season fixture in Cincinnati and the GA showcase in Austin, Texas.  In both cases, LFA came out the victor. According to Head Coach Kurt Fischer, “Lou Fusz is a gritty, hard working team who are very difficult to play against.  Every time we played them we learned a little bit more about ourselves and it made us a better team.”

A high pressure, high intensity side who press aggressively and counter quickly, the CUP girls knew that the game would be determined by how well they were able to use the ball to gain territory and prevent the LFA from disrupting the ball in their own half.  From the outset, CUP was able to take territory desired and played in the opposition half for much of the first 40 minutes even while facing a 10 mile per hour wind.  The territory and ball movement led to chances with the deadlock finally broken by Tatum Borman at the 28th minute after an attack started by Nadia Wall on the right hand side who played an early ball behind the oppositions last line.  RJ Marques chased down the long pass and weaved through three LFA players before driving a low cross through the box that found a free Borman who hit a one-time left footed blast to open the scoring.

The score remained 1-0 at the break.  The 2nd half started with a reinvigorated LFA who attempted to reassert themselves in the first 10-15 minutes culminating in a key save from CUP GK Anneliesse Knight.  “Anneliesse was full extension and parallel to the ground when she parried that shot off the post to keep LFA off the score sheet,” said CUP Director of Coaching, Blake Decker.  “That was a decisive moment in the match.  If she does not make that save, it’s 1-1 and LFA takes the initiative. That was the best chance LFA had created up to that point.  The denial of it bolstered the confidence of our team and reversed the momentum that had been building since coming back from the halftime break.”

The shift in momentum precipitated by that save did not take long to manifest itself in the form of a second goal when, in the 63rd minute, CUP forward Anna Habra pressured a pass back to the LFA centerback about 10 yards inside the CUP half and did just enough to nip the ball away.  The ensuing 60 yard run while fending off two recovering defenders and riding multiple tackles finished with Habra slotting the ball past the oncoming LFA goalkeeper.

The third would come shortly after as CUP quickly capitalized on their growing hold over the game.  After an attack started on the right hand side saw a ball played across the top of the box, Habra drew a defender then dummied the ball for Lexi O’Shea whose one touch finish left no chance for the LFA goalkeeper.

LFA would find some solace in a goal that was scored with 90 seconds remaining in the match from a set piece deep in the CUP half.  After the ensuing kickoff, CUP continued their effective use of the ball, a hallmark of the game, killing off the remaining time in possession of the ball in the LFA half setting up an on-field celebration as the  04 and 05 GA teams rushed the field at the final whistle to celebrate this tremendous achievement with their younger clubmates.

According to Executive Director, Scott Rodgers, who, along with 07 GA Assistant Coach Sarah Fitzstephens, watched the national championship match via livestream from a hotel in St. Louis while at the USYS Regional Championships, “Winning a national championship is so special and rare.  To top it off, the fact that the two CUP GA teams also in California were there to support and celebrate with their fellow CUP players demonstrates the culture and type of young people, not just soccer players, we aim to develop at CUP.  We are so proud of our U14 GA players and all of our staff, not just for what they achieved but how they achieved it.  The way in which this team played, the way they represented themselves, their teammates, their families, their coaches and their club throughout this season and competition...truly exemplary.”

The National Championship match capped off a run consisting of 11 goals scored, 2 goals conceded, 3 shutouts and not a single goal conceded during the run of play.

“I am unbelievably proud of these girls”, said Head Coach, Kurt Fischer.  “It is awesome to be a part of a team where each game different players step up and come up big to get the team a positive result.  This team has had its challenges through the year and we came back stronger for it.  I have always said, a true measure of a team is how they handle adversity.  I am thankful to be this team’s coach and I am excited to see how we can improve next year.”

For more information about the Cincinnati United Program or the Girls Academy, please visit cincinnatiunitedsoccer.com or girlsacademyleague.net.